Sakai family and Matsudaira family, etc. are for 400 years before of fact and the Matsudai feudal clan which date back more than now, there was a lot of traffic of the samurai family at the castle town several daimyos built, and a way and abundant culture of common people also developed into a lifestyle to that. KAJI shop, a sculpture, dyed goods and fabric developed from early times. A cultural exchange with Edo was also the time of Edo early stage lord of castle Nobuyuki Sanada publicity extensively, and people's interest enter of OMAN, the dyer who accompanied, a painter and the painter more famous than Kyoto again were invited, too, and I made a kimono draw the hand-drawn design, and I was making them dye it. This added further gorgeousness to a dyeing and weaving thing from before and made the new world of dyeing appear. It's drawing by hand Yuzen that a painting-like technique and an expression were inherited in it.

Jimeshi
After making the fabric width fixed, an upset is the first important work of the purpose which doesn't form.
Fitting
To put a sketch, it's the work which is done as the pattern of the dagger part has a fitting for the part where I pattern finish size, and doesn't go wrong.
Sketch
It's the process which soaks a brush in the spiderwort liquid made with a flower of a dayflower for fabric of long length such as a white birthplace of a fitting and the putting bottom, and puts on line drawing and does the design circumstances to dye the design. When this spiderwort liquid is washed with water, I disappear.
Layered glue placement
To prevent a dye beginning to spread over a part in addition to the design, when having finished dyeing glutinous rice glue (rice cake glue) etc. by the process left on the surface of the birthplace along a profile and a line, a line of glue is left in white as I had sticky strings, so it's called "strings".
Yuzen Sashi
The color makes the dye the design of the inside every paste for fine line printing by small brush and brush, and it's done. The harmony of the color of the whole shade strait is being arranged, and such as considering the feature of the dye, it's the most important process.
Steam
It's the work to hang, steam by 120 times of steam and make a dye be fixed so that I may steam and do contact between the fabric in a druse.
To put paste
The work which prevents a dye of a lot of place dyeing entering a design part by glutinous rice glue (rice cake glue).
The pull dying
It's place dyeing of fabric. I soak a large brush in a dye and dye liquid uniformly in the whole. The techniques which do various slurs using a brush of big and small are also high skillfulness and a process which requires technology by this one kind.
Steam
The work to make a ground color be fixed.
Flush
It's put in the water which runs and it's an important process before a make-up for the birthplace where I go back over by hand, take glue of strings and a residue, make the fabric flexible and even suggest the one of the color time and again.
Organize
The fabric elastic by all processes, first, "in a place, with the selling point of", the process returned in the state.
Pattern finish
This process is a process of finishing by correcting with a brush to make the dyed pattern portion into a finished product, and also foiling gold and silver etc. 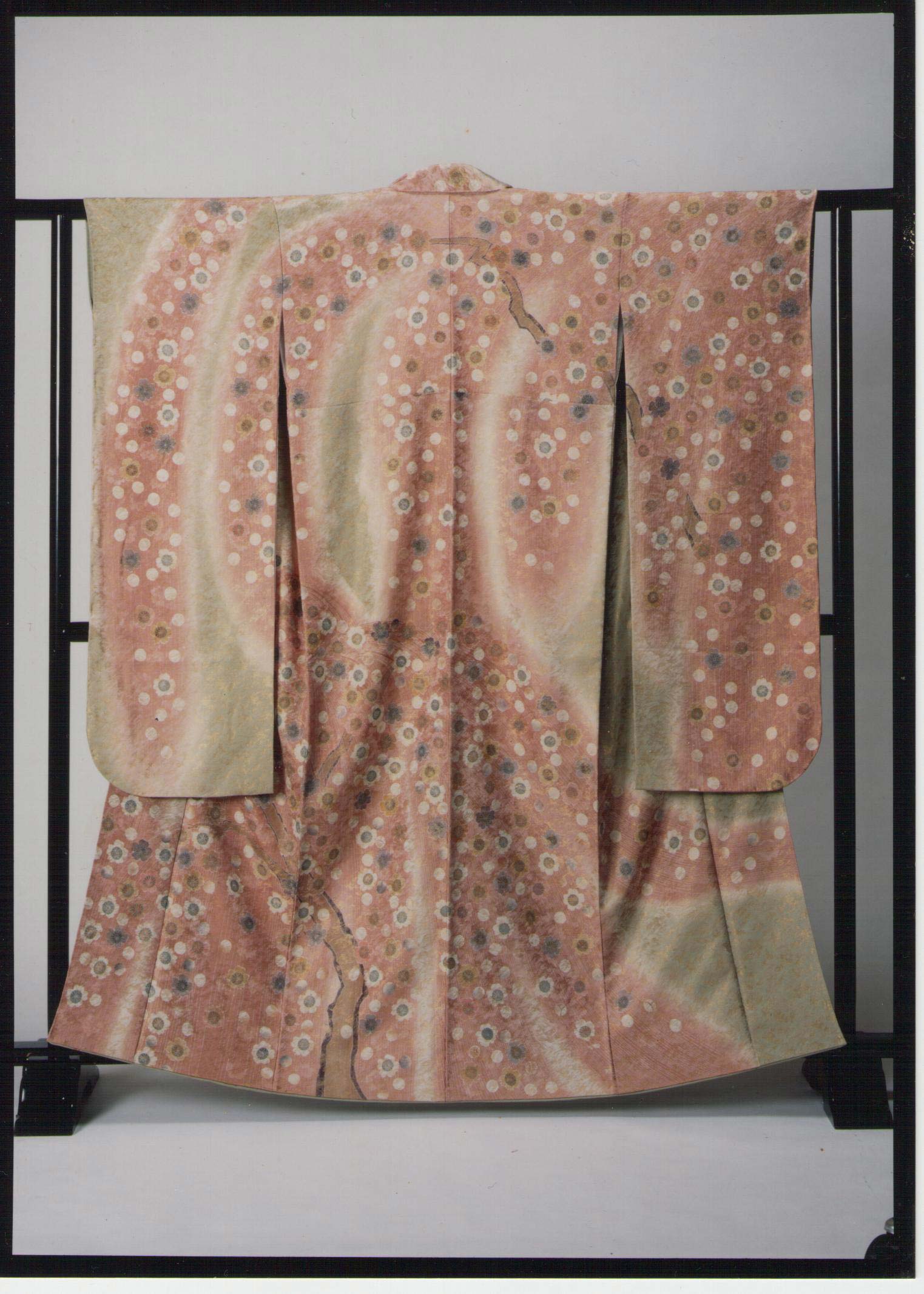