Uchiyama Paper was born in the Mino country where Mr. Yagunemon Hagiwara of Uchiyama village of Takai gun, Shinano County (Kinoshita Prefecture Shimokitai gun Nagano prefecture now) in the Shinano County in the Edo era 1661 (Hirobumoto) years, acquired homemade and returned home It is reported that it was the beginning that he made it with.

In addition, in one article, the Matagi who live while hunting while living in the mountains made paper from the wild native to Yamano by the technology which was acquired during the movement, and experienced Kosugeyama in Uchiyama mountain of Iiyama shi Oku Mizuho Kosuge It also can be said that it began from the place where paper was paid to place (mixed Shinto and Buddhism) as a food for life. Although its reliable material is poor and the origin is unknown, the name seems to have been named from place name. In the Edo era it seems that paper mushrooms were widely distributed around Oku Shinano, and it seems that paper stocks have been done in the Shimano area of Oku, 1706 (Hoei) It seems that paper manufacturing was an industry subject to taxation in the middle Edo period because there is a statement "Giftsuki Mura Takayuki" in "Paper Filter Fuel Gift Bureau 25 Five Seven Minutes Ichihara".

The fact that paper production spread in Oku Shinano is that it was suitable as a side job of farmers in Oku Shinano area known as a heavy snowy area, the demand for tough sliding paper is high in the local and neighboring Echigo countries high cash income , And that snow helped to expose the characteristics of the Uchiyama paper to the snow. When entering the Meiji era, improvements are made to the manufacturing method, introduction of power etc. in the manufacturing process is done. In 1902, Nagano Paper Trade Association was established with 1,130 manufacturing units, 175 units sold and 1,354 raw material supplies. However, handmade manufacture, which requires a lot of labor while mass-produced paper is spreading, is inefficient in production efficiency, the turnover has been successive, and the union will be dissolved in 1951.
The remaining producers established the Hokudin Uchiyama Paper Industrial Cooperative Association, keeping the tradition that lasts 350 years.

Cultivation of a paper mulberry
A paper mulberry is a plant of mulberry family and grows naturally aside of the mountain region near a house and the fields. I grow into about about 2 meters for 1 year and use partial fiber of bark as a raw material of Japanese paper. I grew something to use as a raw material of Japanese paper in exclusive use and mow in the middle of previous November when it snows in Hanzan.
Smothering, stripping and black leather dryness
A picked paper mulberry is cut into about 1 meter of length from 80 centimeters, it's bundled up and this is steamed by a cauldron. While being hot and soft, the leather part which becomes a raw material is torn off. I call the leather torn off black leather, dry this in the sun and make them dry. The state by which black leather is dried by an eaves was winter charming sights in Oku Shinano formerly.
toukawa and leather oysters
You can leave in night outdoor and freeze after I soak the black leather which dried in water and soak in water sufficiently. The epidermis is made easy to tear off by repeating this about 3 times. An epidermis of the black leather which froze is scraped off using the tool called "oysters".
Snow bleached cloth
I knit the back black skin I have, knit in a rope and put it, and leather oysters are opened on the snow, and snow can be shoveled sparsely. When it's exposed to the sun for about about 1 week in this state, when snow melts, a paper mulberry is bleached by the ozone which occurs. On the next day when fresh snow fell, a family, snow bleached cloth is performed to work in full force. I call the state that I have finished drying white skin and make white skin dry by the sun.
SHA JUKU
White skin is boiled by an iron pot with alkaline pills to make the fiber soft. An aqueous solution of sodium carbonate decahydrate and caustic soda is employed as an alkaline pill. Because fiber was most difficult to hurt, straw ash was being used from the old days. After boiling and ripening, an alkalinity is scoured with water.
Bleach and gnarl picking
It's the process I didn't have before, but for further white to be asked from Japanese paper, it's bleached by bleaching powder and hypochlorous acid soda present. The dead leather, the knob and the trash which mix with bleached fiber are taken.
dakai
I beat for about 1 hour and relax fiber in one and one while adding caustic starch to dakaiki including white skin. ※ A complicated process to here is the preprocessing it takes for handmade by "raw material adjustment task".
Built with ball is small
Leather of the paper mulberry da understood is gathered like each about 1 kilogram of ball. It's to measure the raw material which is put in the water tank called "making ship" to gather like a ball. Water makes and enters a ship about 600 liters, and on the other hand 4 balls are put in. Juice of the nature of the Nibicus manihot L (SHO KI which runs: A common name grated yam is blue.) (elm) is added and stirred 15 liters to make more fiber in the water uniform. This work is called "KOBURU".
Making
Paper fiber is skimmed in SUKETA from the inside of dissolved white liquid. The work from which extra water is spilled is repeated many times while shaking SUKETA freely as even bits and pieces of SUKETA will be the uniform thickness. This is let run and it's called making. Because all paper as well as keeping the uniform thickness in one of paper has to be same, subtle feeling and experience are needed work. The spirit state is reflected work so that you said "Paper made intention." Therefore the paper a senior citizen who has an experience for more than 20 years made was being made good paper.
Uchiyama paper was produced by family all the members from the past. In a morning of snow, a family, it's in full force and a paper mulberry is exposed to snow. But sink making is said to be male work. That's because it's the hard work to have to keep moving sakuketa to a side before and after a constancy without stopping in the cold water by which a relationship seems broken off on a day cold for winter. When I also stop in a moment while it's work, the life of the paper is delicate and is severe work so that it's cut off, and the experience and the sense my father who shipped the apprenticeship grew are also indispensable for tens of years. It's finally to make 200 a day by handmade.
Compression and dryness
After pressuring by a compression machine and squeezing extra water first, each one of paper made up lays out, and makes a heated iron plate dry. More defective products are sorted out and it's gathered in a quire (48).
Cut and next to the paper
It's trimmed in 28.1 centimeters of length and the size in 40.6 centimeters of side using a cutting machine. It'll be wrapped in the state which connected more 48 to the side by glue, did one next to the paper made 19 meters of length and wound every quire in case of Japanese sliding door paper, and it's Uchiyama Japanese sliding door paper. Paper of the state that it was cut in case of brush and ink paper is wrapped by twenty-five zhou (1200) unit. Settlement of twenty-five zhou is called a cluster. 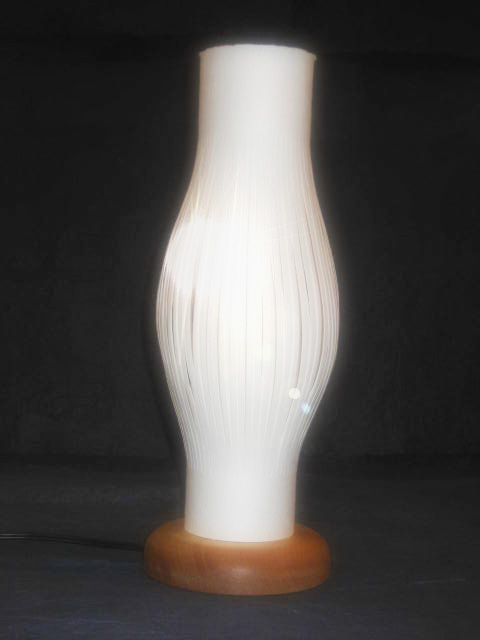 The lamp which gives the easy light off was made with the simplicity which just does a slit. You can feel the strength of the core and flexibility of Uchiyama paper with the expression independent only by Japanese paper.Please enjoy the gentle light which spills from "TIKUMA".